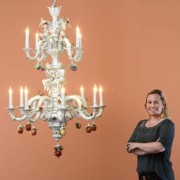 Johnstown native Chris Antemann has long been fascinated by 18th-century porcelain figures and the culture that made them popular — a culture of courtly ritual, which included powdered wigs above painted faces and sumptuous banquets in which porcelain was prized as “white gold.”

“My father was a lover of chamber music, so I grew up with the sound of the 18th-century around me,” says Antemann, who now lives in Joseph, Ore. “And my parents always fostered education in the arts and history, so I credit them for moving me in the direction toward this work.”

In 2010, when the head of Meissen porcelain in Germany was looking for a way to revitalize the company, he decided to re-implement a successful program from the 1920s that brought in outside artists.

“He found me on the Internet, googling ‘contemporary figurines,’ because they wanted to revitalize the figurine, specifically,” Antemann says.

In 1709, German alchemist Johann Friedrich Bottger succeeded in making the first European hard-paste porcelain. A year later, Frederick Augustus I, Elector of Saxony, set up the first porcelain manufactory in Meissen, Germany. To this day, Meissen porcelain is still made in the nearly identical and highly secretive process as it was three centuries ago.

Antemann was invited to participate in the newly created Meissen ArtCampus, where she collaborated with Meissen master artisans on unique pieces and a series of limited editions of her sculptures.

Now, those pieces can be seen in the traveling exhibition “Forbidden Fruit: Chris Antemann at Meissen,” which opened Oct. 3 at the Frick Art Museum in Point Breeze.

Antemann, 45, has a bachelor of fine arts degree from Indiana University of Pennsylvania (1997). After earning her master of fine arts in ceramics from the University of Minnesota in Minneapolis, in 2000, she moved with her husband, Jacob Hasslacher, to Joseph, a tiny town tucked way up in the northeastern corner of Oregon.

Beginning in 2012, after spending three months experimenting and planning at the Meissen ArtCampus, Antemann created her first large-scale piece, the “Paradise Chandelier,” which is on display here.

Inspired by a chandelier originally created in the mid-1700s by Meissen master “modelleur” Johann Joachim Kandler, Antemann says she was interested in creating her version of it for “technical and historical reasons.”

“I first made the chandelier just to get used to making things in separate parts and working with a collaborative team,” Antemann says of the massive 12-light porcelain chandelier.

Made up of 54 individually kiln-fired parts, it takes on the classic form of the great master’s chandelier but with Antemann’s subtle, playful twist, which adds an element of seduction between the figures.

The 18th-century French Rococo style has always been about seduction. The 18th century was a time when seduction was a game and the men of French aristocracy in particular had little to lose.

Requiring 300 molds in its creation, Antemann’s erotically charged version of an 18th-century banquet offers a contemporary twist on Kandler’s original “Love Temple” from 1750 that inspired it.

In 18th-century France, a banquet was not simply a dinner; it was an elaborate social affair filled with rare delicacies, thematic sugared centerpieces, and, of course, porcelain.

In Antemann’s banquet, the harlots and housemaids that seemingly seduced their all-white, naked male suitors, are the ones in control.

Antemann describes her take on an 18th-century banquet as “a little more feminist. … The female figures have the power. It’s their party.

“The female nude is predominant in art history,” Antemann explains. “So, I saw leaving the male white and nude as a ‘plus one.’ Painting and empowering the female figures really turned that on its head a little.

“These female characters are aware of the male gaze; they understand the male gaze. But they play with it a little bit and toy with it by biting the fruits or looking out to the viewer.”

Even before her collaboration with Meissen, Antemann was known for her detailed depictions of lavish 18th-century court banquets, having made five such tableaux in her studio since 2007.

“My work was already dealing with a lot of the themes you will find in this work, but on a larger scale,” Antemann says.

For Meissen, Antemann expanded the vision of the “Love Temple” installation to include a Pleasure Garden (inspired by Jean-Honoré Fragonard’s famous “Progress of Love” series) made up of eight separate pieces that surround the temple, creating an elaborate tableaux in the great tradition of royal 18th-century sur la table.

Antemann’s “Dreams Collection” of smaller, limited-edition works complete the exhibit, which is presented in the context of the Frick’s permanent collection of 18th-century French art.

“What’s so nice about her work is that you can appreciate it on so many levels,” says Sarah Hall, director of curatorial affairs at the Frick Art Museum. “It’s astonishingly beautiful in its detail, and it provokes fantasy and projection. It makes you happy and delights you, but it also has that little twist that gets you thinking about relationships, people and material culture. There’s a lot of layers to it that really makes it satisfying.”

Additionally, Antemann organized a selection of porcelain from the Frick’s permanent collection, which has been installed in the Frick Art Museum’s 18th-century French salon period room. The room has been opened for this special exhibit for the first time since 2003.

Kurt Shaw is the art critic for Trib Total Media. He can be reached at kshaw@tribweb.com.

Want to join the discussion?
Feel free to contribute!

Still running until May 2016: “Forbidden Fruit: Chris Antemann at MEISSEN®”... 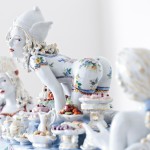