The 14th annual Sculpture, Objects and Functional Art Fair, which runs from Thursday through Sunday at the Park Avenue Armory, will offer contemporary decorative arts and design from 55 galleries and dealers. The theme of this year’s fair is the use of historical reference, which appears in different ways in the art on view. Michael Eden’s work is a 21st-century take on the forms of historical ceramics, like those of Josiah Wedgwood (who was himself a pioneer of the Industrial Revolution), employing synthetic materials and cutting-edge technologies like additive layer manufacturing.

The young Dutch designer Joost van Bleiswijk’s glass objects are what he calls “contemporary versions of forgotten objects,” while Chris Antemann’s porcelain vignettes subvert the delicate sensibilities of 18th-century figurines with a satirical look at gender roles and social taboos. Also at the fair, Arzenal, a gallery from Prague, will show a collection of glass pieces organized by the designer Borek Sipek, which includes not only his own works but those of designers like Ron Arad, Andrea Branzi, Alberto Meda and Nanda Vigo. These designers — many of whom came of age in the 1970s and early 1980s — worked with traditional Czech glassmakers to create vases, bowls and other objects that are very now. 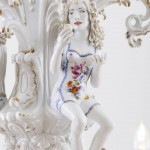 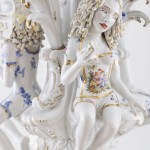 Forbidden Fruit at The Crocker Museum
Scroll to top